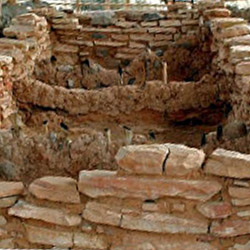 This ancient village in the heart of Utah’s canyon country was one of the largest Ancestral Puebloan communities west of the Colorado River. Now called the Coombs Site, it is believed to have been occupied from AD 1160 to 1235 and may have housed as many as 200 people. Archeological excavations at the site have revealed more than 100 structures and have produced thousands of artifacts, some of which are on display in the museum. In addition to museum collections, visitors may also explore the Coombs Site, located directly behind the museum.