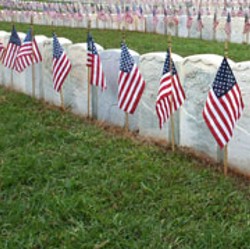 Camp Sumter, commonly called Andersonville, was one of the largest military prisons established by the Confederacy during the Civil War. In existence for 14 months, over 45,000 Union soldiers were confined at the prison. Of these, almost 13,000 died from disease, poor sanitation, malnutrition, overcrowding, and exposure to the elements. The largest number held in the 26 -acre stockade at any one time was more than 32,000, during August of 1864. Today the beauty of the prison site belies the suffering that once took place inside the stockade.