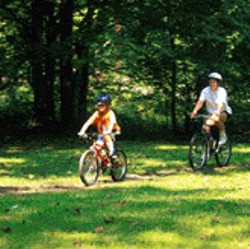 For over a century, the scenic picnic grounds located near the southwest shores of Lake Harriet at the intersection of West Lake Harriet Parkway and 45th St. W have been a popular gathering place for people of all ages. Equipped with grills, tables, water and electricity, the picnic shelter is available for reservations. The park also features several outdoor grills and picnic tables for use on a first-come, first-served basis. The park’s tennis courts and totlot playground provide a pleasant recreational pastime for picnickers and park goers alike. Beard’s Plaisance is one of the city’s oldest parks; it was developed on land donated by Henry Beard, James Merritt and Charles Reeve in 1884. Although it was later determined the land wasn’t theirs to give, the men were cleared of any wrongdoing in the transaction. The picnic area was however named in Beard’s honor in 1893. “Plaisance” is derived from the French word for “pleasure ground.”