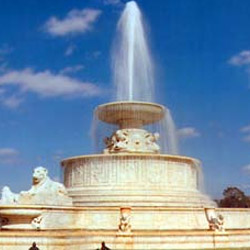 This 987 acre island park features a children’s zoo, conservatory, 9 hole golf course, golf practice facility, Dossin Great lakes maritime museum, and a nature interpretive center. The park also includes three lakes, 150 acre state protected wooded area, beach and spectacular views of Detroit and Windsor Skyline. Belle Isle Park is now a State of Michigan park under a 30-year lease agreement signed by the City of Detroit. Under the agreement, the City maintains ownership of the park, while the Michigan Department of Natural Resources manages the island park. Belle Isle, a 982-acre island, officially became a state park on February 10, 2014. An $11 annual fee, which allows entry into all state parks, will be gradually phased in during the first year of state management of Belle Isle. Individuals who walk, bike or jog to the island will not have to pay the entry fee.