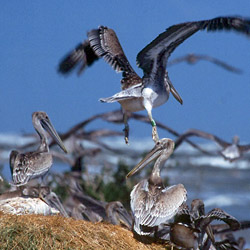 The Breton National Wildlife Refuge was established in 1904 and is the second oldest refuge in the National Wildlife Refuge System. The refuge is comprised of a series of barrier islands including Breton Island and all of the Chandeleur Islands in St. Bernard Parish, Louisiana. It was formed from the remnants of the Mississippi River’s former St.Bernard Delta, which was active 2000 years ago. The barrier islands size and shapes constantly are altered by tropical storms, wind, and tidal action. The area above mean high tide is approximately 6,923 acres. In 1975, the refuge was established as a National Wilderness Area. And in 1990, an agreement with the Louisiana Department of Wildlife and Fisheries and the U.S. Fish and Wildlife Service authorizing the service management rights and law enforcement authority on additional State of Louisiana owned lands. The agreement increased the refuge by an additional 11,350 acres for a total of 18,273 acres.