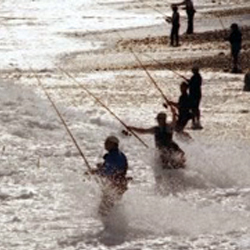 The Camp Hero vicinity has played an important role in history, being home to the Montauk Tribe of Native Americans, the site of a lighthouse constructed in 1795 under the order of President George Washington, the site of early sheep and cattle farming and the location where Colonel Theodore Roosevelt and his Rough Riders assembled following the Spanish-American War.