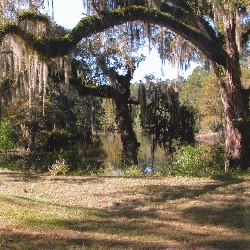 Has 130 acres located on Bayou Liberty in Slidell, LA (on the north shore of Lake Pontchartrain. A former boyscout camp turned nature park, Camp Salmen will have 32,500 linear feet of interpretive trails and will be linked to the 31-mile rail-to-trail Tammany Trace. The site was originally owned by the Salmen Brick and Lumber company (which made many of the bricks that built New Orleans) and then became a boy scout camp for much of the 20th century. Camp Salmen Nature Park features the following habitats: Riverine (bayou) Cypress lowland swamp Southern pine forest Open, grassed area Native plant butterfly garden Pitcher plant bogs Open to the public, no fees charged. Open Weds-Sun from 9am until dark (hours can be extended for special groups) Air conditioned/heated bathrooms with indoor, flush toilets. Covered pavilion available for rental. Educational walking tours and presentations are available!