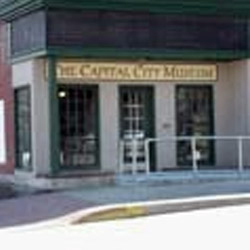 One of the museum’s major exhibits shows off products made in Frankfort over the last 200 years. Shown here are an inlaid table and three chairs made around a century ago in the Kentucky State Penitentiary. The prison was an important part of the Frankfort scene from the early 19th century until it closed in 1937. Over those decades, a great variety of products were manufactured and sold to the public by the prison workshops.