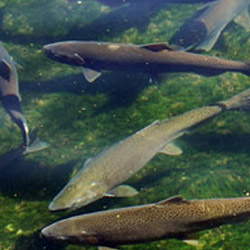 The Carson National Fish Hatchery, built by the Civilian Conservation Corps, began rearing salmon and trout in 1937. During the 1980s, the hatchery began rearing spring Chinook salmon exclusively. Because of the loss and degradation of spawning habitat and the impact of dams on migration, the spring Chinook was in rapid decline. Since 1960, hatchery production has helped spring Chinook populations recover in the lower Columbia River. Visitors are welcome from 7:30 am until 4:00 pm daily.