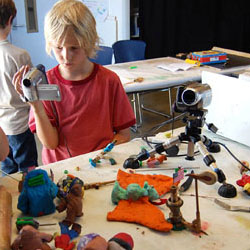 Zeum is the cornerstone of the Rooftop at Yerba Buena Gardens, an innovative project of the San Francisco Redevelopment Agency to develop an entire city block as an urban destination for youth. More than a decade in the planning, Zeum was founded as a not-for-profit organization in 1992, began its signature brand of community programming in 1995, broke ground on its permanent facility in 1996 and opened to the public on October 31, 1998. Zeum was formerly known as the Studio for Technology and the Arts.