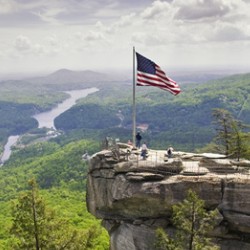 The main feature of this park is the striking 315-foot spire on the gorge’s southern side. The greater Chimney Rock State Park encompasses roughly 5,700 acres on both the north and south sides of the gorge and expansion efforts continue to bring more of the gorge’s rich natural resources into conservation. Chimney Rock at Chimney Rock State Park has been a tourist destination in western North Carolina since a simple stairway was built to the rock’s summit in 1885. In 1902, Lucius B. Morse of Missouri bought the site. The Morse family developed park facilities including a tunnel and elevator to the rock summit, nature center and a network of hiking trails to geologic points of interest including the 404-foot-tall Hickory Nut Falls.