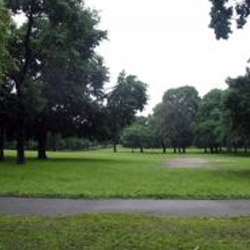 This oasis in a busy Bronx neighborhood comes complete with cool water to swim in. On warm days the park’s pool, one of a handful of the borough’s outdoor public pools, fills up with visitors from the neighborhood eager to splash and swim. Beyond the pool, picnickers taking advantage of Claremont’s rolling hills unfurl their blankets and unpack their lunches. Children fill the two playgrounds, and parents find the park’s gazebo to be the perfect place to hold a birthday party for their young ones. The area that is now Claremont Park was once part of the Morris family estate, founded in 1679. Aware of encroaching suburban development with the arrival of the New York and Harlem River Railroad, Gouverneur Morris II (1813-1888) auctioned off much of his land in 1848. Newlyweds Elliott and Anna Zborowski de Montsaulain acquired a parcel in the northern portion of the former Morris property. In 1859 they built the Claremont mansion and developed the grounds with terraced lawns that descended to the Mill Brook (now Webster Avenue). In 1881 John Mullaly, regarded as the father of the Bronx Parks system, helped to found the New York Park Association. Presenting comparative studies of parkland in foreign cities, predictions of rapid population growth in New York, and rising land values, the Association called for more land for parks in the southern Bronx, which had been annexed by New York City in 1874. This effort culminated in the 1884 New Parks Act and the city’s 1888-90 purchase of lands for Claremont, Crotona, Van Cortlandt, Bronx, St. Mary’s, and Pelham Bay Parks and the Moshulu, Bronx and Pelham, and Crotona Parkways. The Claremont property was prized for its park-like landscape of meadows, farmland, woods, and swamp. Improvements were made to make the site more accessible and to facilitate recreational activities. The mansion was converted for use as the local administrative headquarters of the Bronx Parks Department. New park paths and local streets were laid, and facilities for baseball and tennis were created. The infamous Black Swamp-which swallowed up livestock in colonial times-was filled in by the early 20th century. Eventually, traces of the old estate, such as the apple orchards, were removed. In 1914 the Parks and Playgrounds Association established new playgrounds in eight Bronx parks. The playground at Claremont Park opened on August 1 of that year with swings, shoot-the-chutes (slides), see-saws, swings for different age groups, sand boxes, and basketball courts. The average attendance in the first year was 700 children a day. According to the 1914 Annual Report of the Department of Parks, children were “drawn to these playgrounds where they were able to give full vent to their excess of feelings, and enjoy to the fullest extent those kinds of exercise which were conducive to their well-being both mentally and physically.” Substantial changes in the 1930s and 1940s transformed Claremont into a modern park. The Zborowski mansion was razed in 1938 and replaced with a gazebo, as Bronx Parks headquarters moved to a new building (now called Ranaqua) on Bronx River Parkway. Also in 1938, new lighting, benches, and playgrounds made the park more inviting to senior citizens, parents, and children. Four new playgrounds opened in the park in 1940. A new outdoor pool and changing rooms opened in the park in 1971. New play equipment and safety surfacing were installed in 1996, and additional play equipment, safety surfacing, swings, pavement, and fencing were installed in 1998. One of the Bronx’s oldest parks, Claremont Park has remained on the forefront of conservation and recreation for more than a century.