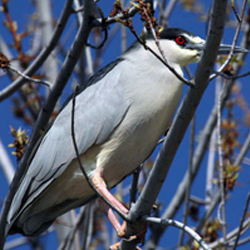 (Also visit the Friends of Mid-Columbia River Wildlife Refuges at http://friendsofmcrwr.org/index.html). Columbia Refuge is a scenic mixture of rugged cliffs, canyons, lakes, and sagebrush grasslands. Formed by fire, ice, floods, and volcanic tempest, carved by periods of extreme violence of natural forces, the refuge lies in the middle of the Drumheller Channeled Scablands of central Washington. The area reveals a rich geologic history highlighted by periods of dramatic activity, each playing a major role in shaping the land. The northern half of the refuge, south of Potholes Reservoir, is a rugged jumble of cliffs, canyons, lakes, and remnants of lava flows. This part of the Scablands, known as the Drumheller Channels, is the most spectacularly eroded area of its size in the world and was designated as a National Natural Landmark in 1986.