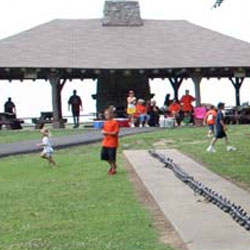 Columbus-Belmont State Park is a 156-acre site that played a fascinating role in the War Between the States. The 1861 Battle of Belmont, fought to overtake the Confederate stronghold here, marked the opening of the Union’s Western Campaign. It was also Union General Ulysses S. Grant’s first active engagement in the Civil War.