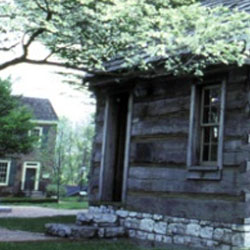 Constitution Square was the site of a series of important events in Kentucky’s history: the ten constitutional conventions that led to Kentucky’s statehood. Frontier statesmen who lived in what was then the Kentucky County of Virginia struggled more than eight years for independence. Finally, on June 1, 1792, Kentucky became the fifteenth state in the Union and Isaac Shelby, a Revolutionary War hero and convention delegate, was named the first governor of the new Commonwealth.