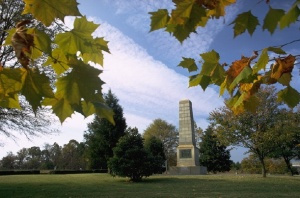 Cowpens National Battlefield commemorates a decisive battle that helped turn the tide of war in the Southern Campaign of the American Revolution. On this field on January 17, 1781, Daniel Morgan led his army of tough Continentals, militia, and cavalry to a brilliant victory over Banastre Tarleton’s force of British regulars. The battle at the “Cow Pens,” one of only a few successful double envelopments in history, is recognized by historians as one of the most important of the American Revolution.