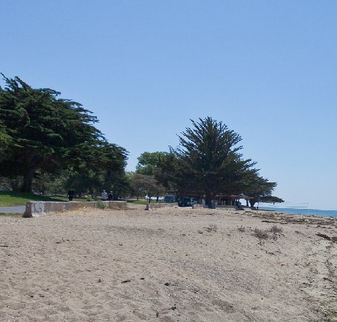 Crown Beach is operated by the Park District under a cooperative agreement with the State of California and City of Alameda. It is named in memory of State Assemblyman Robert W. Crown, who had campaigned for its preservation as public parkland. Showpiece of the park is its 2.5-mile beach, with sand dunes bordering a bicycle trail. The beach is a great achievement of landscaping and engineering. After wind and water action had eroded the beach dangerously, it was restored in early 1982 with sand from San Francisco Bay, pumped ashore by pipeline from a barge. More sand has been added since then, and groins have been constructed to keep it in place. From the 1880s until the outbreak of World War II, Alameda Beach was renowned as an amusement center, the largest beach on San Francisco Bay. Known for its beautiful sands and warm waters, the beach was a popular day-trip destination for residents from throughout the region. It earned the name “Coney Island of the West,” and bathing spas competed for patronage by staging concerts, balloon ascents, carnival rides, baseball games, prize fights, and other publicity stunts. The carnival is over, but the beautiful beach is back, bordered by lawns and picnic grounds. Some of the area’s colorful past is preserved in exhibits at the park’s Crab Cove Visitor Center.