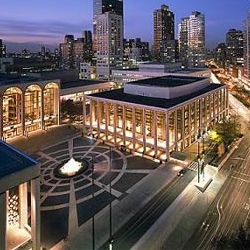 Damrosch Park is an integral piece of Lincoln Center for the Performing Arts, the home of some of the world’s best music, theater, and dance. Completed in 1969, the park is named for the Damrosch Family, an unrivaled family of musicians who contributed greatly to the musical heritage of New York City since Leopold Damrosch brought his family here in 1871. The extensive layout of benches and planter beds make the park an ideal spot to catch a show or just some fresh air. The Daniel and Florence Guggenheim bandshell is the park’s focal point with a concrete plaza that holds 3,000 people and which serves as the main location for large events such as the Lincoln Center Festival in July, Lincoln Center Out of Doors in August, and as the home of the Big Apple Circus October through January. Whether you are planning a visit to enjoy one of Lincoln Center’s many offerings or just passing by, you are always welcome at Damrosch Park.