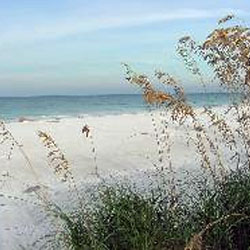 The Egmont Key National Wildlife Refuge, was established in 1974 and protects a diverse community of animals and plants, many of which are either threatened or endangered. This island refuge was once the site of the former United States Army Fort Dade Military Reservation, and abundant reminders of this unique military past can be found scattered throughout the island today. Silent gun batteries testify to a time when mighty battleships reigned supreme on the world’s oceans, and a brick carriage road meanders across the island recalling the days when mules and horses carried military personnel and their dependents on sunny picnics to the beaches. Today, gulls, least terns and other birds perch on the now silent batteries, while Gopher Tortoises, box turtles and an occasional tourist traverse the old carriage roads. Egmont key, an island that once quaked under the sound of massive coastal cannon fire, now resides quietly amid the sounds of wildlife as, once more, nature has taken over this little slice of Florida paradise.