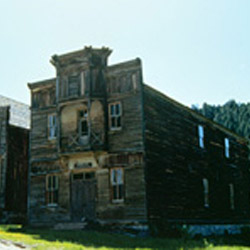 Backcountry roads settle you into a 19th century mining landscape before you reach historic Fraternity Hall and Gillian Hall nestled within the privately owned town of Elkhorn. Bring your camera to record these two picturesque structures from the early-day silver-mining ghost town, preserved as outstanding examples of frontier architecture.