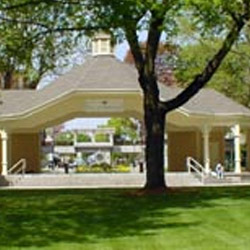 Established in 1853, Esther Short Park was bequeathed to the city at the death of its namesake in 1862 and made Vancouver’s town square. The city’s first piece of public art, a bronze statue of “The Pioneer Mother” was ceremoniously unveiled in 1929. She still stands at the north entrance to the park. Various other attractions, including a skating rink, a wading pool and a railroad engine, have since come and gone.