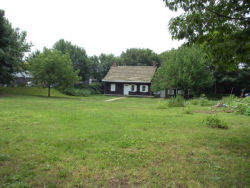 The original portion of the Pieter Claesen Wyckoff House was built ca.1652 and is the oldest building in New York State. It is also one of the oldest wooden structures in this country, and the entire structure was designated a National Historic Landmark in 1968. As a whole the house dates to around 1740 and is an example of the Dutch Colonial vernacular style with its H-frame construction, shingled walls, Dutch doors, and deep, flared “spring” eaves. The house escaped demolition for street improvements to become New York City’s first designated and protected landmark upon the creation of the Landmarks Preservation Commission in 1965.