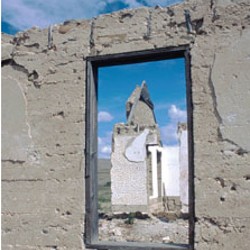 Fort Fred Steele was established June 20, 1868 and occupied until August 7, 1886 by soldiers who were sent by the U.S. Government to guard the railroad against attack from Indians. The construction of the transcontinental Union Pacific Railroad across southern Wyoming in 1867-1896, in turn, brought the cattlemen and sheepherders, loggers and tie hacks, miners and merchants who changed a wasteland into the Wyoming Territory.