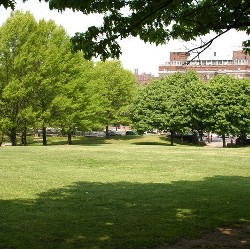 Fort Greene’s history is rife with important names–Walt Whitman, Nathaniel Greene, Frederick Law Olmsted, Calvert Vaux, William Howard Taft, and McKim, Mead and White, to name a few–hinting at the important role the park has played in the city’s history. Originally the site of forts built for the Revolutionary War and the War of 1812, the community surrounding the land started using it as public space shortly after the threat of the War of 1812 passed. By 1847, it was designated a park (Brooklyn’s first), and twenty years later, famed landscape architects Olmsted and Vaux began designing its new layout. In 1897, the park, formerly known as Washington Park, received its name.