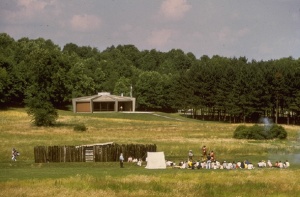 Colonial troops commanded by 22 year old Colonel George Washington were defeated in this small stockade at the “Great Meadow”. This opening battle of the French and Indian War began a seven year struggle between Great Britain and France for control of North America. Great Britain’s success in this war helped pave the way for the American Revolution.