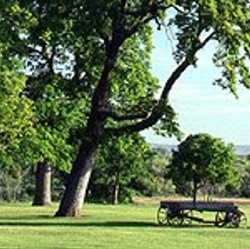 Fort Simcoe State Park is a 200-acre, day-use heritage park in south central Washington on the Yakama Indian Nation Reservation. The park is primarily an interpretive effort, telling the story of mid-19th century army life and providing insights into the lifeways of local Native American culture. Located in the foothills of the Cascade Mountains in an old oak grove watered by natural springs, Fort Simcoe was an 1850’s-era military installation established to keep peace between the settlers and the Indians. Before the fort era, the site was an Indian campground where many trails crossed.