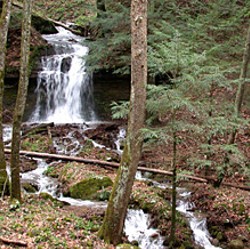 Frozen Head State Park and Natural Area is situated in the beautiful Cumberland Mountains of eastern Tennessee. The 13,122 acres of relatively undisturbed forest contain some of the richest wildflowers areas in Tennessee. The mountainous terrain varies from an elevation of 1,340 feet to over 3,000 feet on 16 different mountain peaks. Frozen Head, elevation of 3,324, is one of the highest peaks in Tennessee west of the Great Smoky Mountains. From its observation tower on a clear day, one can plainly see the Cumberland Plateau, Tennessee Ridge and Valley, and the Great Smoky Mountains. In winter, the mountain peaks are often capped with snow or ice while the lower valleys remain unadorned, thus giving the park’s namesake, Frozen Head. The park’s lush vegetation, small streams, waterfalls and beautiful mountains make Frozen Head one of Tennessee’s most scenic parks.