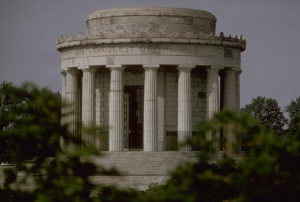 A classic memorial stands on the site of Fort Sackville to commemorate the capture of the fort from British Lt. Governor Henry Hamilton and his soldiers by Lt. Col. George Rogers Clark and his frontiersmen on February 25, 1779. The heroic march of Clark’s men from Kaskaskia on the Mississippi in mid-winter and the subsequent victory over the British remains one of the great feats of the American Revolution.