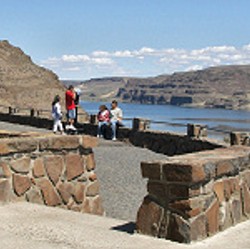 A 7,470-acre, year-round camping park with 27,000 feet of freshwater shoreline on the Wanapum Reservoir on the Columbia River. Petrified wood was discovered in the region in the early 1930s, which led to creation of the park as a national historic preserve. The park is a registered national natural landmark.