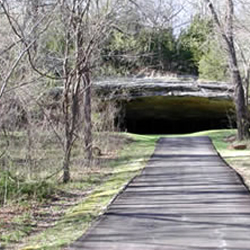 features an unusual sandstone cave that contained evidence that rewrote history books. Once used for shelter, Graham Cave became historically significant when archaeologists discovered how long ago human occupancy had occurred. University of Missouri archaeologists uncovered artifacts revealing human use of the cave dating back to as early as 10,000 years ago. Clues to the lifestyle of the ancient Dalton and Archaic period Native Americans were uncovered. Today, visitors are allowed in the entrance of the cave, where interpretive signs point out interesting discoveries.