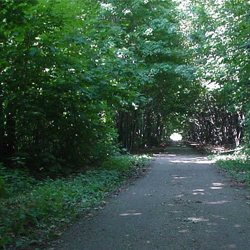 This site is composed of twenty-two miles of abandoned railroad corridor that have been converted into a recreation trail. The northern portion of this paved trail is hilly and winding, while the southern segment is generally straight and flat. The trail meanders through agricultural lands, orchards, and forest, including a portion of the Manistee National Forest. A three-mile section of trail has been added that extends through the Cities of Montague and Whitehall and has been titled the White Lake Trailway.

This site is composed of twenty-two miles of abandoned railroad corridor that...
Events and Place information
43.687401 -86.380548
Large Map