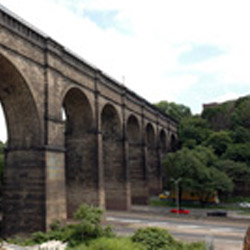 Named after the High Bridge, the city’s oldest standing bridge, Highbridge Park was assembled piecemeal between 1867 and the 1960s, with the bulk being acquired through condemnation from 1895 to 1901. Although widely known for its important landmarks, the Highbridge tower and formerly mentioned bridge, the park offers natural beauty and recreational fun that serve as reason enough to visit. Open vistas and an unusual geologic makeup greet visitors who stroll the pathways north and south through the park, while pedestrians and waterside cyclists on the greenways cherish its magnificent cliffs and large rock outcroppings. The Highbridge Recreation Center and Pool have kept active New Yorkers busy since 1936, and several playgrounds and ballfields have been constructed throughout the park over the last century.