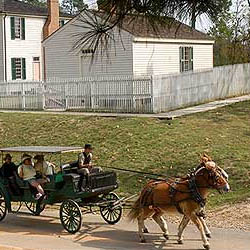 Historic Washington, Arkansas is a 19th-century town conserved and interpreted by Arkansas State Parks in conjunction with the Pioneer Washington Restoration Foundation. From its establishment in 1824, Washington was an important stop on the rugged Southwest Trail for pioneers traveling to Texas. James Bowie, Sam Houston and Davy Crockett traveled through Washington. James Black, a local blacksmith, is credited with creating the legendary Bowie Knife here. Later, the town became a major service center for area planters, merchants and professionals. Washington was the Confederate Capital of Arkansas from 1863-1865.