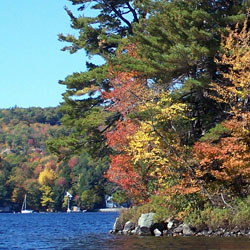 The refuge consists of the former estate of John Hay, private secretary to Abraham Lincoln, Ambassador to Great Britain, and Secretary of State under Presidents McKinley and Roosevelt. The refuge was established in 1987 and the historic buildings and immediate grounds and gardens, also known as “The Fells”, are managed through an agreement with the Friends of John Hay National Wildlife Refuge. The remainder of the 164-acre refuge is managed for migratory birds and resident wildlife by the U.S. Fish and Wildlife Service. The refuge also protects almost one mile of undeveloped shoreline along Lake Sunapee.