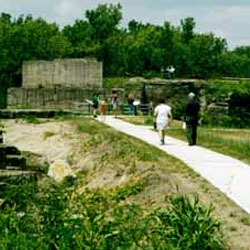 Joliet is known as the City of Steel and Stone. Rich deposits of limestone led to a thriving quarrying industry, and in the years following the Civil War, a huge iron-producing industry would, over 60 years, employ thousands at the Joliet Iron Works. Following the dismantling of the factory in the 1930s, the foundations of this once bustling factory were all but forgotten. However, in the 1990s the Forest Preserve District of Will County preserved this important link to Joliet’s past. Follow a 1-mile walkway through the site on a self-guided tour through exhibits explaining the iron-making process, and just as importantly, describing the men who worked there, many of whom were immigrants to the United States. The site is also an access point for the 12.5-mile I&M Canal Trail/Centennial Trail. This trail, of which portions are paved or crushed limestone, connects Joliet’s City Center to the Centennial Trail in Cook County. Joliet Iron Works Historic Site is undergoing construction during 2009 and early 2010. Once complete, the preserve will offer a picnic shelter, restroom facilities, and drinking water. These improvements are scheduled for completion in 2010.