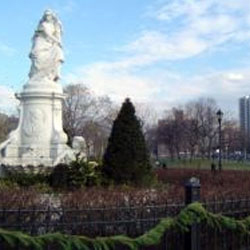 This park, bounded by the Grand Concourse, Walton Avenue, 164th and 161st Streets, is named after Joyce Kilmer (1886-1918), poet, journalist, and soldier. Kilmer was born in New Brunswick, New Jersey and attended Rutgers from 1904 to 1906, graduating from Columbia College in 1908. He began his writing career in New York in 1909, contributing freelance articles and poems to a number of publications before he joined the staff of the New York Times. He is most famous for his poem, “Trees,” written in 1913, which has been learned by millions of schoolchildren.