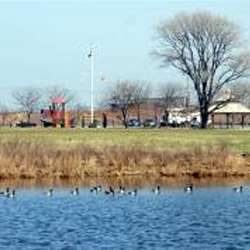 Lemon Creek, which empties into Prince’s Bay, has been known by several names over the last few hundred years. In 1830, the freshwater stream was known as Seguine’s Creek, and later, as the Little North River in 1895. Shortly thereafter, the name of Lemon Creek began to appear on maps, and it has remained, although the origin of this unusual name is not known. The Lemon Creek area is known as Prince’s Bay, which has appeared on maps and manuals in such variations as Princebay and Princess Bay. The first version of the name was made famous by the bay’s oysters, a delicacy on the menus of London and Manhattan restaurants. Several local businesses, however, and the Princess Bay Boatmen’s Association (whose clubhouses and marinas are located in the park), prefer the name ‘Princess.’ Any of the variations is undoubtedly a vast improvement on “Skunk’s Misery”, an 1857 name for the west area between Pleasant Plains and Prince’s Bay.