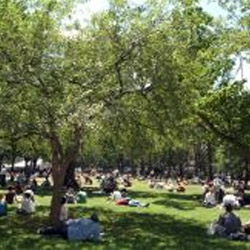 For everyday visits, the spacious dog run, colorful playground, and large grassy area make for a happy escape from the busy midtown area in which Madison Square Park is located. Free Wifi gives the laptop-toting set the opportunity to check their email outside, while the more traditional bring paperbacks to read on the lush lawn and comfy benches. The artwork peppering the park’s grounds is sure to thrill those with an eye for art with its exciting blend of temporary exhibits by new artists and classic monuments that testify to Madison Square Park’s 150-year history. On sunny summer days, Madison Square Park becomes one of the city’s hottest destinations. Lines of hungry visitors craving a taste of the Shake Shack’s milkshakes and hamburgers, some of the best in the city, wrap around the block. Inside the park, children bop their way through summer vacation at the Mad. Sq. Kids concert series, and big kids enjoy a series all their own, Mad. Sq. Music, spanning an eclectic mix of genres. With its varied activities and its landscaped grounds, Madison Square Park offers attractions for everyone. Madison Square Park is named for James Madison (1751-1836), a Virginian who was the fourth President of the United States (1809-17). Madison earned the title “father of the Constitution,” from his peers in the Constitutional Convention. He also co-authored The Federalist Papers (1787-88) with New Yorkers Alexander Hamilton and John Jay. Madison was Secretary of State from 1801-09, serving through both of President Thomas Jefferson’s terms. As President, he was Commander-in-Chief during the War of 1812 with the British. Madison was the rector of the University of Virginia from 1827 until he died in 1836. The largest parcel of this land was first designated as public property when Royal Governor Thomas Dongan revised the City Charter in 1686. Since then, this area has been used for a variety of public purposes. A potter’s field was established here in 1794, and then was moved in 1797 to Washington Square. By 1811 the land was home to a United States Army Arsenal (1806) and laid out as part of a military parade ground (named for Madison in 1814), bounded by 3rd and 7th Avenues and 23rd and 34th Streets. The arsenal fell out of military use, and served as a “House of Refuge” for juvenile delinquents from 1825 until 1839, when it was destroyed by fire. After being leveled, sodded, and enclosed, Madison Square Park opened to the public on May 10, 1847, with boundaries of Fifth Avenue and Madison Avenues and 23rd and 26th Streets. Citizens quickly claimed the public park as their own. Their protests against plans to erect the Crystal Palace here in 1853 resulted in its relocation to Bryant Park. Nevertheless, the park has been host to grand celebrations, replete with temporary decorative arches, to commemorate historic occasions and anniversaries such as the centennial of the signing of the Declaration of Independence in 1876 and the triumphant return of Admiral Dewey from the Spanish American War in 1899. The original Madison Square Garden was located adjacent to the park at Madison Avenue and 26th Street. It was owned by William Vanderbilt, and opened in 1879. The building was razed in 1899 and replaced with a Moorish style building designed by Stanford White. The second Madison Square Garden stood until 1925 when it was demolished and replaced by the headquarters of the New York Life Insurance Company. Promoter Tex Rickard built the third Garden that same year at 8th Avenue and 50th Street. Soon after the creation of the Department of Public Parks in 1870, the square was relandscaped by Ignatz Pilat, Chief Landscape Architect, and William Grant. The new design brought in the sculptures that now highlight the park. One of the works capturing a politician in bronze is Randolph Ranger’s statue of William H. Seward (1876), the Secretary of State who purchased Alaska in 1867. He was the first New Yorker to have a monument erected in his honor. Others include J.Q.A. Ward’s sculpture of Roscoe Conkling (1893), a reconstructionist politician; and George Edwin Bissell’s monument to Chester Alan Arthur (1898), the 21st American President. War heroes are represented by James Goodwin Batterson’s monument to General Worth (1854-1857), the Mexican War veteran who is buried just west of Madison Square, and the Admiral Farragut monument, Augustus St. Gaudens’ first major work that was dedicated in 1881 to the Civil War naval officer. Other features are the ornamental fountain (1867) and the Eternal Light Flagpole (1923).