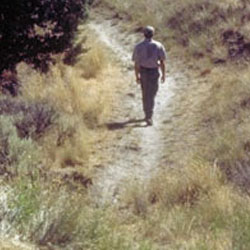 Gate of Death and Devil’s Gate were names given to this area during the Oregon Trail period. These names referred to a narrow break in the rocks through which the trail passed. Emigrants apparently feared that Indians might be waiting in ambush. Diaries record a series of skirmishes between the Shoshone Indians and emigrants on August 9 and 10, 1862. Ten emigrants died in the fight, which involved four wagon trains. The skirmishes took place east of the park and not at Devil’s Gate as commonly believed. Some confrontations may have occurred there, but they remain unverified.