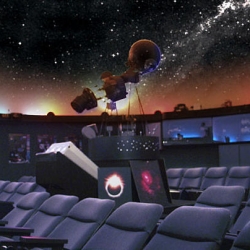 Museum of Natural History and Planetarium

The Museum houses more than a quarter million (250,000) objects. As is true of most museums, less than 2% of its holdings are on exhibit for the public at any one time. The other 98% is stored behind the scenes in climate controlled vaults under the care of the curators. Among the natural history collections are 175,000 preserved plants and animals such as insects, mollusk shells, birds, and mammals. There are also 15,000 earth science specimens consisting of rocks, minerals, and fossils. The Museum has an especially rich collection of plant fossils from Coal Age Rhode Island…these are older than dinosaurs being 350 million years old! The cultural collections consist of about 20,000 archaeological artifacts, mostly from North America. They also contain 4,000 ethnographic objects such as baskets, textiles, tools, and carvings with special emphasis on Oceania and Native North America. The Museum also houses a wealth of informational resources including a reference library for staff use and an extensive document and photographic archive. The planetarium is open to the public every weekend and daily during July and August, with shows beginning promptly at 2:00pm.