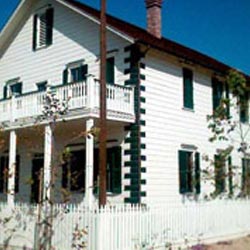 Recreates life in the Mexican and early American periods of 1821 to 1872. Five original adobes are part of the complex, which includes shops, restaurants and a museum. La Casa de Estudillo is a mansion built around a garden courtyard. La Casa de Machado y Stewart is full of artifacts that reflect ordinary life of the period. Other historic buildings include a schoolhouse, a blacksmith shop, San Diego’s first newspaper office, and a stable with a carriage collection. (San Diego became California’s first Spanish settlement when a mission and fort were established in 1769.)