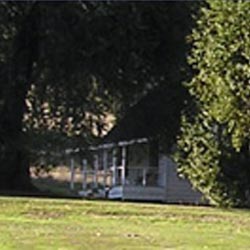 The park overlooks the Petaluma River and San Pablo Bay from the east-facing slopes of 1,558 foot Mount Burdell. The name “olompali” comes from the Miwok language and may be translated as “southern village” or “southern people.” The Coast Miwok inhabited at least one site within the area of the present-day park continuously from as early as 6,000 BC, until the early 1850s. Olompali contains “kitchen rock,” a large boulder used as a mortar in which early people ground acorns and seeds into a fine flour for food preparation. Many women would gather near such grinding rocks to prepare food and socialize.