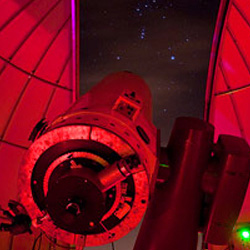 In addition to the Eastern Iowa Observatory and Learning Center facility, which was completed in 2008, the observatory features two other buildings on the grounds that house permanently mounted telescopes. The domed building, which was the original structure on the grounds, houses a 1970s-era Celestron classical cassegrain telescope with a 16-inch mirror. This rare telescope was generously donated by The University of Iowa through the Department of Physics and Astronomy. Across the sidewalk from the 16-inch telescope is a wooden building with a roll-off roof that houses a refracting telescope with a 6-inch lens and several portable telescopes.