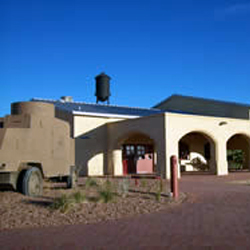 On March 9, 1916, the soldiers of General Francisco “Pancho” Villa attacked the small border town and military camp at Columbus, New Mexico. Pancho Villa State Park contains extensive historical exhibits which depict this raid, the first armed invasion of the continental United States since the War of 1812, and also the last one.