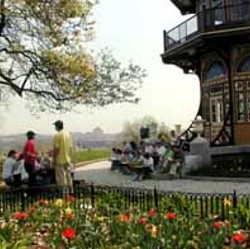 The Lake is a combination of open water and a wetland habitat for fish, waterfowl, and songbirds. Before it was known as a park, the site of Patterson Park played a major role in the War of 1812, serving as the grounds where American troops stood ready during the decisive battle of North Point at “Hampstead Hill,” the promontory in the park where the Pagoda is situated. In 1827, Patterson Park began life as a park with 6 acres of land donated by William Patterson, a wealthy shipping merchant, who hoped to create a “public walk,” thus becoming the oldest park in Baltimore and the first gift of land given to a city for the purposes of public recreation. In 1860, the park was expanded and served as an Army hospital (Camp Patterson Park, 1862) and camp for Union soldiers during the Civil War (Camp Washburn). Patterson is frequented by neighborhood schools and churches for its athletic fields and is home to one of the two ice rinks available in the city.