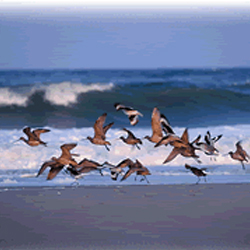 Pea Island National Wildlife Refuge was established in 1937 “as a refuge and breeding ground for migratory birds and other wildlife”, including the greater snow goose and other migratory waterfowl. The Refuge lies on the north end of Hatteras Island, a coastal barrier island which is part of a chain of islands known as the Outer Banks. These islands are separated from the mainland by a series of marshes and shallow sounds up to 25 miles wide. Pea Island is a much-used feeding and resting area for many species of wintering waterfowl, migrating shorebirds, raptors, wading birds, and migrating songbirds. The 13 miles of ocean beach provide nesting habitat for loggerhead sea turtles, piping plover and several species of shorebirds. Peregrine falcons occur regularly during migration and bald eagles are occasionally seen. This small Refuge receives over 2.5 million visitors annually.