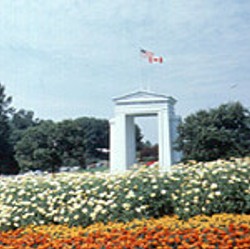 20-acre day-use park commemorating treaties and agreements that arose from the war of 1812. The park celebrates the unguarded United States/Canadian border that stretches from the Strait of Juan de Fuca to the Bay of Funday in Nova Scotia. The park features horticultural exhibitions and the giant, commemorative, concrete arch that straddles the border of the two nations. The countries co-maintain the monument.