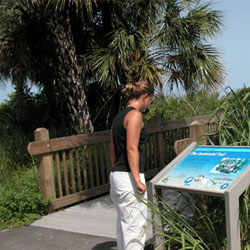 About ten thousand years ago, the Indian River Lagoon formed along the east central coast of Florida. The Native “Ais” Indians occupied the area that is now the refuge for thousands of years. The arrival of American settlers increased in the mid-1800’s, as a result of improved steamboat and rail transportation. Settlement also brought greater attention to the thriving bird rookeries in and around the lagoon. By the late 19th Century, an expanding market for bird feathers for the fashion industry resulted in the slaughter of beautiful herons, egrets, spoonbills and pelicans, at one point, plume feathers were worth more than gold. In 1858, Dr. Henry Bryant witnessed the slaughter of sixty spoonbills a day on Pelican Island. But the last of Pelican Island’s birds was about to be saved by the arrival of a concerned German immigrant.