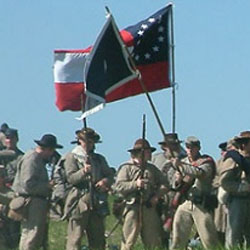 On October 8, 1862, cannon explosions shattered the rural peace of this tranquil countryside and the death moans of young soldiers. Perryville became the site of the most destructive Civil War battle in the state which left more than 7,600 killed, wounded or missing. The park museum tells of the battle that was the South’s last serious attempt to gain possession of Kentucky. The battlefield is one of the most unaltered Civil War sites in the nation; vistas visible today are virtually those soldiers saw on that fateful day in 1862. A self-guided walking tour on the battlefield interprets battle events.