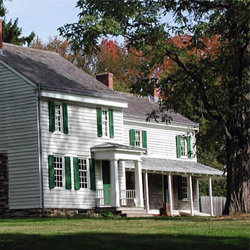 The famous Mercer Oak, once stood in the middle of the battlefield, not far from the spot where General Hugh Mercer fell during the Battle of Princeton. The Clarke House, built by Thomas Clarke in 1772, witnessed the fierce fighting and served as sanctuary for General Mercer, who died there nine days later. The house contains period furniture and Revolutionary War exhibits.